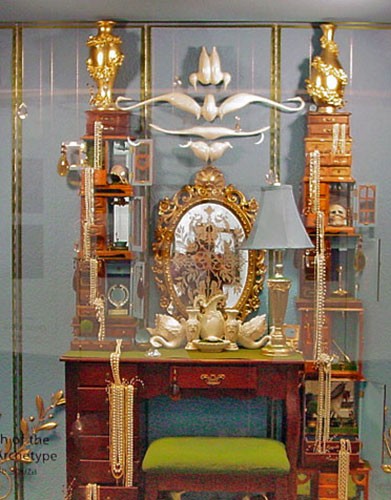 Shyra De Souza is an interdisciplinary artist based in Calgary. She attended the Sculpture department at the Alberta College of Art & Design where she earned her Bachelor’s Degree in Fine Arts with distinction in 2006. She was awarded the 2009/2010 Quickdraw Animation Society Production Scholarship (Calgary), received several art production grants, and has exhibited her work in Canada and the United States. As well as maintaining an artistic studio practice she holds the position of Past-President at the Untitled Art Society in Calgary, and is a founding member of the Media and Visual Arts Housing Association of Calgary. Shyra De Souza is an active member of the arts community in Calgary and has taken part in several professional capacities, including: Panelist at the Art Spaces Session at the Calgary Arts Congress in 2011, and Juror for the Calgary Arts Development ArtsVest Program in 2012.

I am compelled to find ways of separating form from content. Using found objects, found imagery, or by creating imagery that typically embodies a closed text and are immediately recognizable, I wish to shift the relational affect of these objects and imagery into an ambiguous or alternate space, blending narratives, and drawing attention to the process of interpretation itself.

The use of this recognizable imagery forces me to work within a set of limitations imposed by contemporary material culture. I interact with or manipulate objects and the environment, slowly learning what new forms and contexts they may take. I undertake an organic, push-and-pull process of adding, removing, layering, or combining elements of the found imagery, displacing their cultural content, and blending extremes to cast doubt on any binary position. This process is intended to find ways the work can be located between the subjective and the objective, where a decipherable narrative is absent and the viewer is left to read the work on a purely experiential level. My intention is to create a cognitive dissonance in the work, forcing the viewer to engage in an analytical thought process.

The resulting work focuses on personal meaning, and conveys an element of mystery or grandiosity. The often labyrinthine forms create a sense of the uncanny; a tension between our desire for the easily identifiable the unknown. I locate the viewer in the experiential world by referencing the body, either through form, or by drawing attention to the physical traces left behind by interaction or repeated use. The intersubjectivity of these compositions appear to be physically functional in some way, but the viewer is denied any point of reference other than their perceptual abilities. The result is one that plays with the symbolic forms of science and the body, and conveys a sense of a mystic or pseudo-scientific phenomenon.